Cyclestreets.net is an excellent route planner for the whole UK.  WelHatCycling keep the local pages up to date.

We have documented what we would like to see in the future in our Space For Cycling plans with maps and photos.

We also have two new cycling “tube” maps inspired by the recent CyclingUK campaign.  These highlight the good, bad and ugly sections of local cycle routes.  Look for the red lines which show where cycle routes are needed.

The major missing links the tube maps shows are:

Thanks to an objection to a one way street order, we have successfully gained an off road cycle path which will now be built alongside High View, in South Hatfield as part of the Hilltop shops development project.

The dashed dark purple line in the map below shows the route.  At the north end (top) it will link to the pedestrian crossing of Bishops Rise and, when built, the cycle path along the west side of the road to Woods Ave.  Where the cycle path crosses the entrance to Jimmy Macs, the road will be on a raised table, to slow traffic down.  The cycle route then follows the west side of High View to the church and Northdown Road. 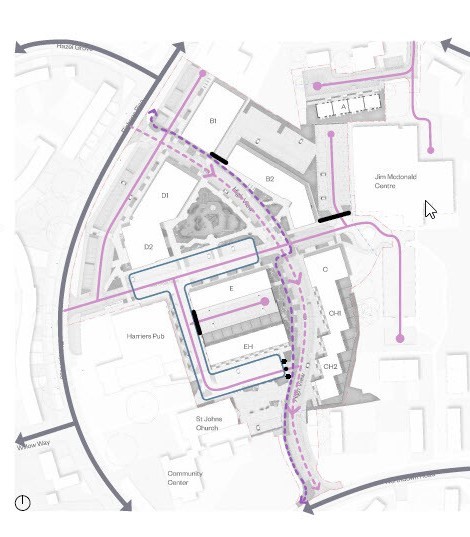 In April 2020, Welwyn Hatfield Borough Council gave planning permission for the redevelopment of the north east corner of the town centre, which used to be occupied by a 1930’s block which was a Pizza Hut in the 1980s and 1990s.  A condidition in the plans is the extension of the cycle route along Wellfield Road from its current terminus at the Post Office through to Queensway where a toucan crossing of that road then joins the cycle route up to French Horn Lane.  The development is contributing to the toucan, which is a separate project.  You can see the planned new route in blue here with the toucan shown in red. 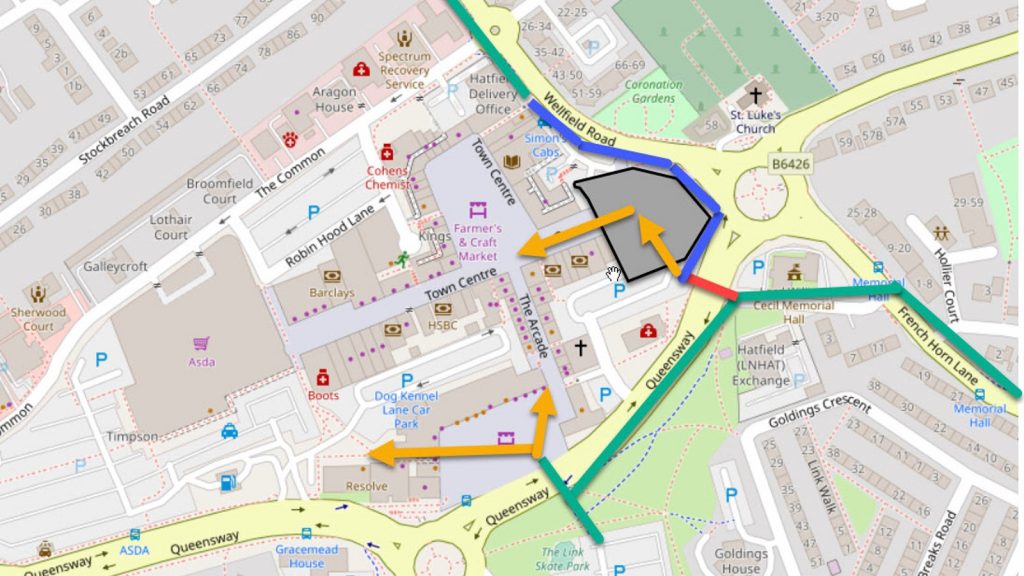 This is a hugely significant project for Hatfield and something we have been campaigning for as long as we have existed. The new route will: 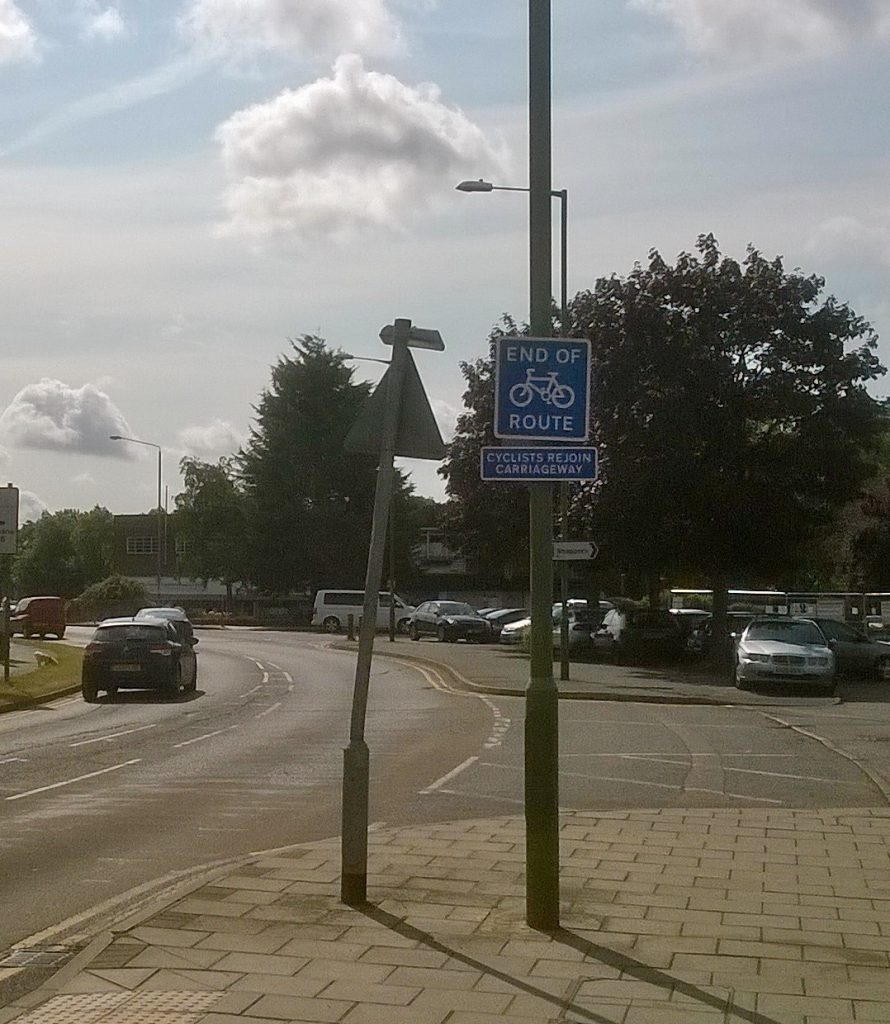 Likely completion is in 2022-23.   This photo looks towards the new route.

You can read about the previous phases of this route further down the page.

A new housing development called Claves Crescent is being built on the east side of Bessemer Road between Mundells and Haldens.  Across the front of the development a new cycle path has been constructed which links an existing path at Mundells to the new route.  This duplicates a path on the other side of the road, but enables someone cycling out of the new estate to use this new path and then the Mundells subways to cross Bessemer Road, saving a road crossing.

Unfortunately the new path ends just before the Haldens roundabout and does not connect into the Haldens estate, a massive missed opportunity. WelHatCycling is asking why. 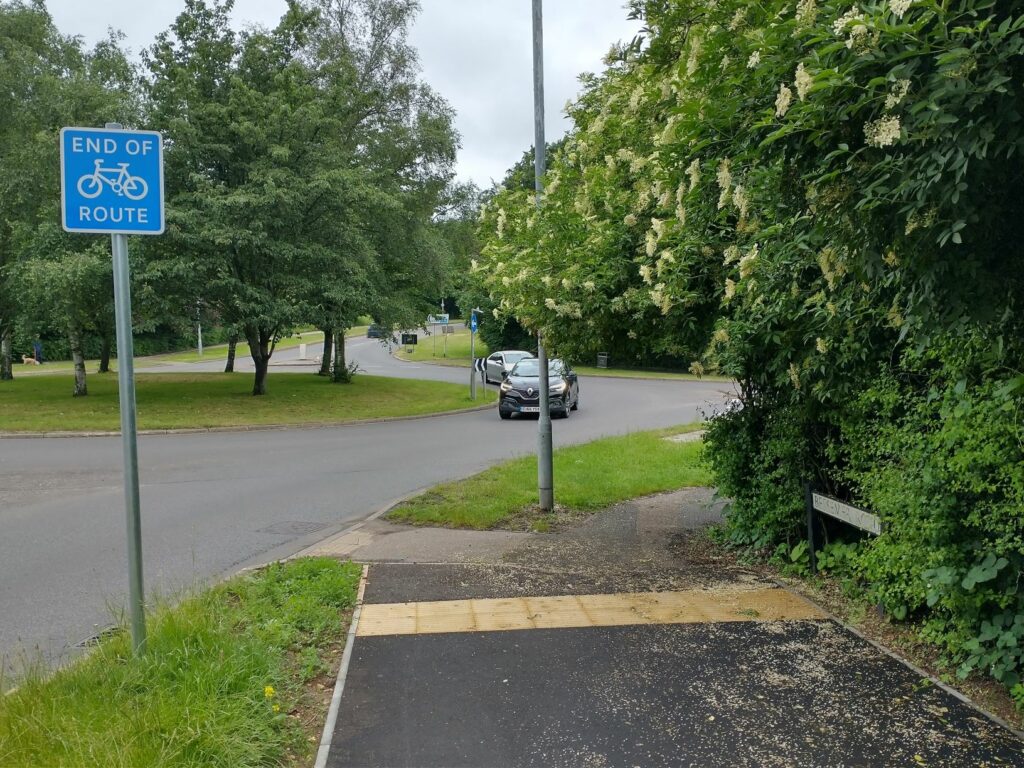 The four lanes (two East, two West) as the road crosses the East Coast Main Line have been reallocated to give two protected cycle lanes, making this a much more pleasant and safer cycle route.  The next step is of course to link up to the wider cycle network at either end…

Hertfordshire County Council is currently consulting on a permanent route which will be a two way path on the south side of the bridge.  You can see the Bridge_Road_Technical_Drawing and Welwyn Garden City cycle routes consultation response. 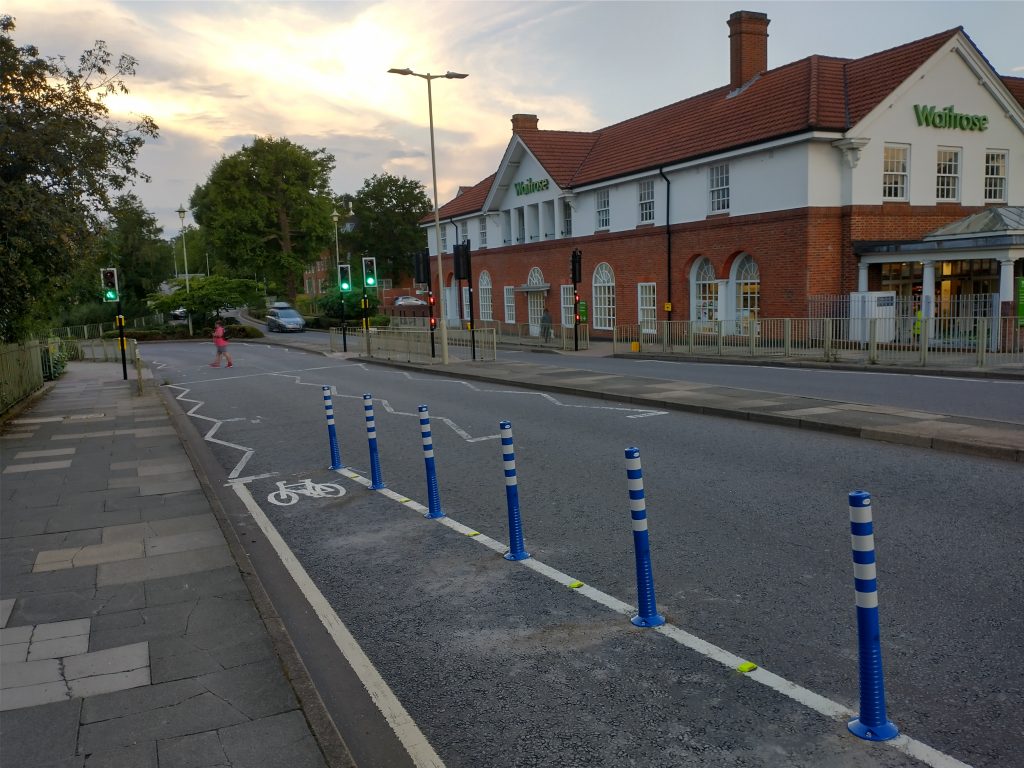 A small alteration – bollards blocking through traffic – has made this into a lovely route for both walking and cycling, helped by upgraded crossing facilities at the west end. Digswell_Park_Road_Technical_Drawing to add a toucan  (light controlled walking and cycling) crossing over Bessemer Road and a zebra crossing of Hertford Road at the north end.  We’d like to see the zebra turned into tiger crossing to allow cycling and for the safe cycle route to be extended to New Road, so children don’t have to cycle on Hertford Road. 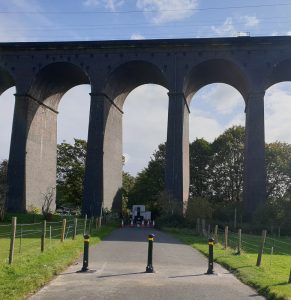 A short section of cycle route has been constructed from the A1000 Hertford Road west along side the section of Mount Pleasant Lane which is also the slip road to the A414.  You can see the desire line to the left of the posts in the photo below which is taken looking west from the A1000. 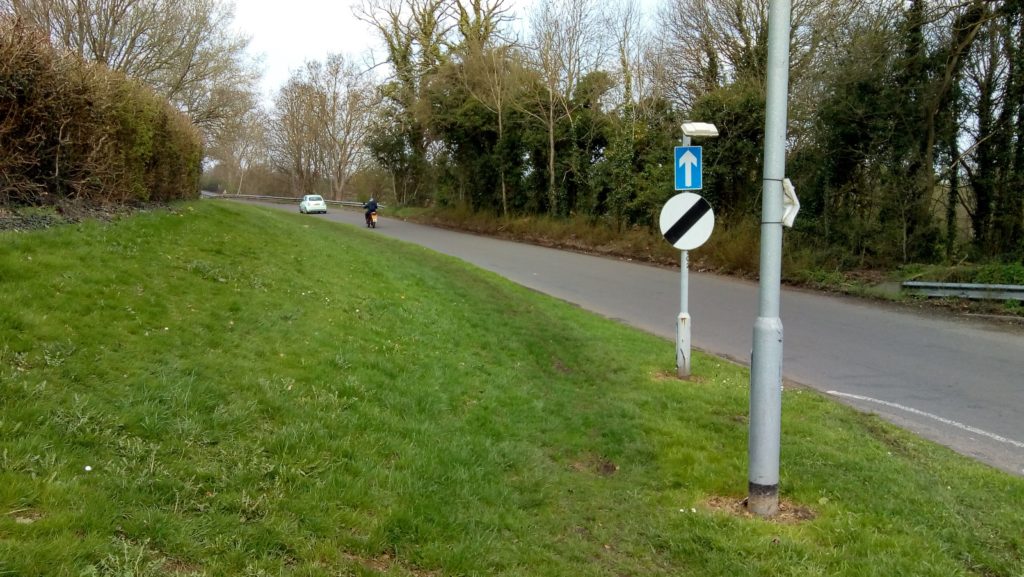 This is the same location in April 2019 with the route nearing completion: 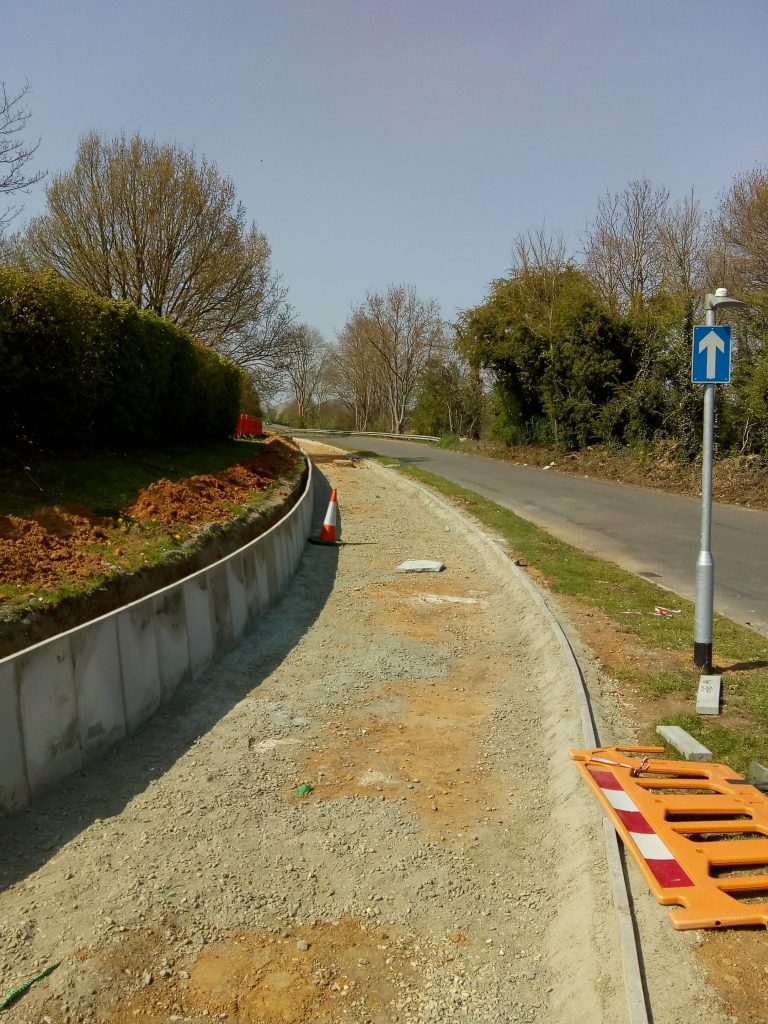 As yet nothing is planned to then link this route up to Tesco. As the photo shows, the problem is a narrow pavement next to a motorway speed road.  A local resident has been campaigning for this extension to be built. Although outside our area, this is still of interest to local cyclists.  PDF map and details here.

This route extends the Woods Ave cycleway up Woods Ave to Bishops Rise, including a wider shared use pavement on the north side of the road and works at the Bishops Rise roundabout to enable access to the University Halls of Residence.  The route was completed in May 2018.  The three photos below give a flavour of the changes made. 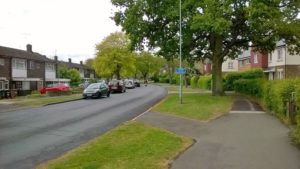 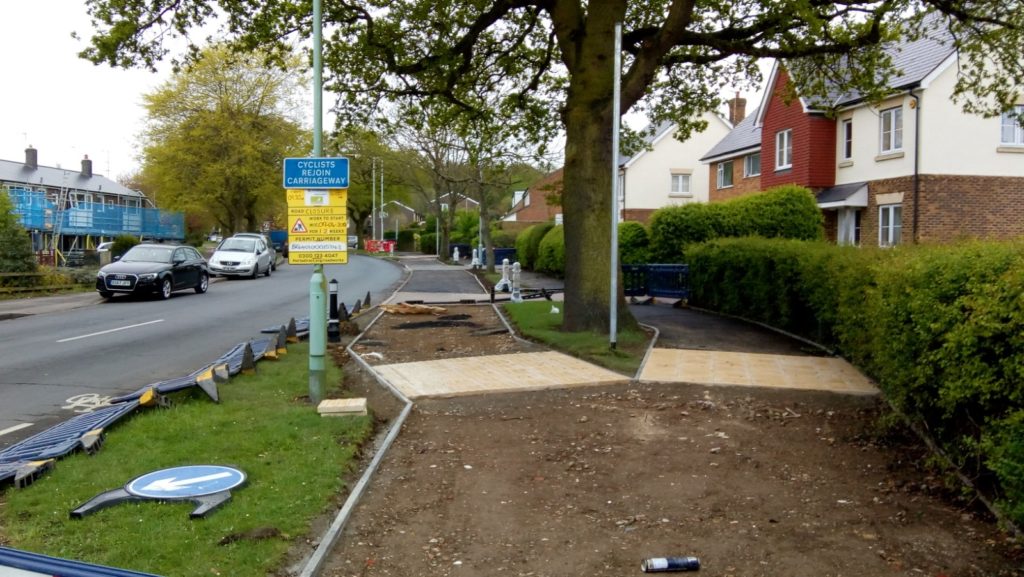 The photos shows the view from the end of the current cycle route at Oxlease looking west, up the hill to Bishops Rise.  As can be seen in the more recent picture, the cycle path passes the large tree to the left on the current grass verge and then become shared use path for the rest of the route.

Eventually there will be a route from the Galleria to Hill Top and South Way connecting with this route.  Some work on Bishops Rise is likely to happen alongside the rebuilding of the area around the Hill Top shops, funded by planning gain.  This should see the the current path extended from the university halls to the shops.

This project has been split into three phases.  The news as of April 2020 is that the final phase is now going ahead and should be completed in 2022.  You can read that news further up this page.

We have left the full story below to show just how long and complex it is to get any cycle routes developed.

This was completed in 2010. Not included was a link to Old Hatfield via the Batterdale subway as this is deemed too low to be safely used, despite there being other routes in other towns which are much lower. Sustrans says in its guidelines “we consider it preferable having “substandard” clearance than either a blockage or a dangerous road crossing”. This section connects with the Great North Way (NCN12).  A possible alternative route also exists via Hatfield .

Phase 2 The Common to Comet Way

This was completed in October 2012. The scheme was funded by developer funding from the Business Park (Section 106 contributions).  It connects to the Alban Way (NCN61) on Wellfield Road and the Great North Way (NCN12).

This now should be completed in 2022.

Following WelHatCycling’s critical comments about the proposed on-road section on the Queensway roundabout, the plans were revised to include a Toucan crossing of Queensway with a route round the north east edge of the new town centre.   What happens will depend on how the town centre is redeveloped.  We met Grant Shapps MP in June 2015 to raise our concerns, see below.

In 2019 WHBC announced plans for new flats and shops at the north east corner of the town centre.  The promised toucan is missing from the plans which only include a very short length of the cycle route, immediately next to one of the blocks of flats. It does not include completion of the entire route.

WelHatCycling objected to this plan and demanded the completion of the route as promised. We have made a short video which was shown to the Planning Committee when it met to decide on these plans:

The good news is the Planning Committee approved the plans with the full cycle route as we demanded. Grant fully appreciated the merits of our proposal which includes a toucan crossing of Queensway by the Queensway Health Clinic and was supportive of it. He agrees that the proposal fits in well with the upcoming development of the north east end of the Town Centre, which includes an anchor store and postgraduate halls of residence for the University of Hertfordshire.

He could see the need for pedestrian and cycle access across Queensway, which then creates a continuous link between Hatfield Railway Station and the Business Park, and provides access to the shops at that end of the Town Centre.

He has already had meetings with the larger stakeholders including the University of Hertfordshire, Hertfordshire County Council, Welwyn Hatfield Borough Council, Gascoyne Cecil Estates and Hatfield Town Council and suggested WelHatCycling should be included in future discussions. In addition to £2.6m already committed to the development of the Town Centre, Welwyn Hatfield Borough Council has also received £6m so the cost of the crossing and the associated short section of cycle path should, in Grants view, be a small and easily funded part of the wider project.

It certainly helped that we had recently been in contact with WHBC councillors, particularly Lynne Sparks (now Mayor), and that Colin Haigh, Head of Planning for WHBC, has been in contact with the Hertfordshire Local Access Forum on the proposal. Our involvement with the University of Hertfordshire over local cycling issues also helped, and students had expressed their appreciation to Grant of our information stall and Dr Bike at the recent University Wellbeing day. We hope this might lead to speedier progress on this much needed link.

The link has been included in the WHBC 2030 vision for Hatfield.

At recent meetings about the refurbishment of  White Lion Square, we were assured the phase three works are indeed planned and will happen as and when that section of the town centre is rebuilt.