Our first attempt at a one way ride using the train attracted 7 people in total, including 3 newcomers. Adam, Chris and myself set off on the train from Hatfield, while Mauro, Jan and John joined soon after at WGC and Welwyn North. When we arrived at Arlesey, Wai was waiting for us on the ‘Up’ side. Getting across the tracks with a bike is difficult at Arlesey. There are no lifts and the only alternative to carrying your bike up and down the footbridge steps is a half mile ride via the footway, the wrong way along a one way road to the cycle path beside the A507. Feeling keen to get riding and not wishing to make life difficult for Mauro with his heavier electric assisted bike, we opted for the long ride to meet up with Wai.

With everyone together, we set off on NCN 12 towards Stotfold and Hertfordshire, benefitting from two magnificent cycle and footpath underpasses where we needed to cross the busy A507. NCN 12 splits when it meets Letchworth Greenway. One branch cuts across the town centre, whilst the other branch follows Letchworth Greenway. We took the rural route taking us past Radwell Meadows Country Park and the outskirts of Baldock. An interesting feature of the route for traffic engineering spotters is the two rare Pegasus crossings (designed for use by horse riders) over main radial routes into Letchworth. (At least one of us seemed interested).

The two branches of NCN 12 re-join just south of Willian, continuing mainly via bridle paths and a short section actually owned by Sustrans to the outskirts of Stevenage at Coreys Mill. From there we used Stevenage’s magnificent cycle path network to our lunch stop in Stevenage Old Town. Fed and watered, we headed to Stevenage station where Jan and John dropped off to catch the train back to Welwyn.

From Stevenage NCN 12 follows a narrow, but busy road up to Old Knebworth. This isn’t a good road to cycle on, especially with a group, so we took the main road route to the top of Knebworth hill before turning off along Deard’s End Lane and the back lane route to eventually pass Danesbury Fernery (new ride destination perhaps) and on to Welwyn Village.

Not keen to tackle the steep hills out of Welwyn, we headed along the footway beside the A1000 (that ought to be a shared path) to the end of Bessemer Way. Mauro left us at the viaduct to take his easy route home via Nursery Hill, whilst the Hatfield contingent continued along Bessemer Way.

Three of us were, needless to say, unable to resist the temptation of a cream tea at Mill Green Museum as we passed! 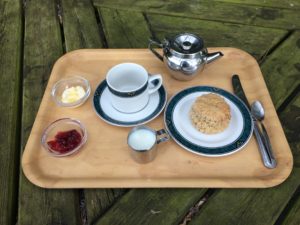 Here’s where we went: